Or, 10 reasons these 10 reasons you shouldn't get a flu shot are total bullshit. Copied from my Facebook this morning. 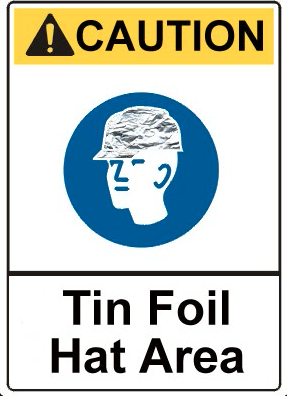 Next, here's why it's bullshit:

1. " There is a total lack of real evidence that young children even benefit from flu shots"False. There is a mountain of evidence, gathered by independent researchers, that shows the opposite. This blog does not cite a source for its claim; however I'll show several in mine.  This article shows that children do benefit from the flu shot. Additionally, do you know who usually dies from flu? Infants, children, and elderly. Thus far this year, the pediatric mortality rate for flu is 28. Know how many have died from the flu shot? Fucking ZERO. Here's another source: THE CDC. I know the Tinfoil Brigade thinks the CDC is a gubment 'spiracy trying to turn your offspring and you into mindless zombies (just like I Am Legend!) but that's not reality.

3. "Ever noticed how vaccinated children within days or few weeks develop runny noses, pneumonia, ear infections and bronchiolitis? "Not only false but anecdotal (as is the greatest percentage of anti-vaccine bullshit I come across). Furthermore, if your kid did get a runny nose, you think that's worse than being on a vent for respiratory failure from influenza-related pneumonia? Are you fucking serious?

4. "It is a known fact that flu vaccines contain strains of flu along with other ingredients" - What point are you trying to make with this one? how the fuck do you think a vaccine works? It's not homeopathy. You don't take the flu virus and fucking water it down to one part per billion and Holy Shit! It works! Surely your google research can show you a third-grade example of how the immune system works when stimulated, and how you need flu virus particles - along with "other ingredients" - to make them effective and safe.

5. "The Flu vaccines contain mercury, a heavy metal known to be hazardous for human health"The amount of ETHYLMERCURY in vaccines is extremely minute, and once again, Google Warrior, it's fucking different than METHYLMERCURY, which is the neurotoxin most anti-vaccine idiots claim is in vaccines, but is found in fish and shellfish. Take a basic chemistry course, and then shut the fuck up about this. You are wrong.

Oh, and here's a study on the cumulative effects of ethyl mercury exposure in children from vaccines. Read it. Ponder it.

6. "There is mounting evidence that flu shots can cause Alzheimer’s disease"Find me one - ONE reputable study finding this. The blog states there are plenty - yet doesn't post any citations? This likely stems from the previous concern that aluminum (again, fucking different than Teh Murkeries, geniuses) may be a causative factor in Alzheimer's - which has since resoundingly been ruled out. You know what causes Alzheimer's? GETTING OLD. Find a cure for that and you'll solve some problems.

7. "The Center for Disease Control appoints a 15-member Advisory Committee on Immunization Practices (ACIP). This committee is responsible for deciding who should be vaccinated each year. Almost all the ACIP have a financial interest in immunizations."Shut. The fuck. Up. On this shit. You know who has a financial interest in you not vaccinating and ingesting snake oils and shit? Mercola. Tenpenney. All their ilk. Here's the ACIP info.

8. "Research shows that over-use of the flu-vaccine and drugs like Tamiflu and Relenza can actually alter flu viruses and cause them to mutate into a more deadly strain."Flu viruses mutate just fine on their own. That's why you get a new shot every year. This is well-known, well-doucumented, and anticipated. Bacteria and viruses have one goal: to survive in your body and replicate. What they often do *not* do is "mutate into a more deadly strain" - why, class? BECAUSE IT WANTS TO SURVIVE AND REPLICATE. IT CAN'T FUCKING DO THAT IF IT KILLS ITS HOST FASTER THAN IT CAN REPRODUCE. The H1N1 is a great example; started out quite deadly, and as the season progressed, it weakened, which increased the infection rate - people didn't get *quite* as sick and stay home; they were able to function a little better, which caused them to be out and about more, infecting more people. Want a great example of a virus that DOESN'T mutate and is pretty fucking deadly? The ones causing viral hemorrhagic fevers (Ebola, Marburg, Sudan, Bundibugyo). These are filoviruses, and they kill pretty fucking fast. No need to mutate, they're fabulously deadly on their own. In fact, they kill their hosts so quickly they really *can't* mutate. Filoviruses are non-segmented negative sense RNA viruses. They have only separated into Marburgvirus and Ebolavirus for about 10,000 years. In short, THEY ARE FUCKING OLD AND THEY HAVE BEEN THE SAME PRACTICALLY FOREVER. For those that still don't get it: in the case of flu virus, mutation = less deadly.

9. "In the 1976 swine flu outbreak, many who got the flu shots developed permanent nerve damage."The vaccine in 1976 showed an increased rate of Guillain-Barre in vaccinated persons - ONE additional case per 100,000. Regardless of vaccination, there are approximately 100 cases of GBS per week. I'll state that number again: the '76 swine flu vaccine showed a correlation of ONE ADDITIONAL CASE PER 100,000 PEOPLE WHO GOT THE VACCINE. Go ahead, do the math. I'll wait.

10. "Trying to guess what strain to vaccinate against each season has proved to be no more effective than a guessing game."JEEEEEZZZUUUUUUSSSS. There are over 100 influenza centers around the world that study this. There are extremely smart fucking people working in them. They do nothing else except study which strains are circulating. They then give this information to the World Health Organization centers in the U.S., Japan, China, the UK, and Australia. Each country decides which strains to vaccinate for and develops their vaccines accordingly. Is it a perfect fucking system? No. But it's a fuck of a lot more effective than sitting on your ass sniffing garlic powder and stuffing primrose oil up your ass while googling how baaaaaaaaad the flu vaccine is and reposting BULLSHIT.