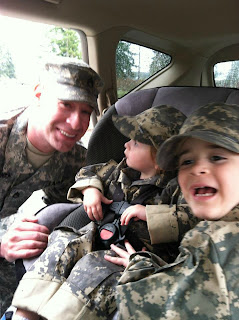 Well Husband is finally in-theater. We were able to talk for a few minutes on the phone last night, and even though there was a terrible echo and a delay, it was still pretty great to hear his voice. I imagine anyone listening to our conversation (on either side) probably thought we sounded like a hearing-impaired married-for-sixty-years couple (a lot of "WHAT'D YOU SAY? THERE'S A LOTTA GRASS?!?!?" "NO I SAID I MISSED THAT ASS!!!!") Oh.

Vincent has been "expressing" himself a bit more lately; if you know me from facebook you've probably seen the video, or as I like to call it, The Evidence. The child has an unbelievable set of lungs on him. It's both impressive and discouraging.

Vladimir has been having some trouble at school; basically he went from kindergarten for 2 1/2 hours a day to seven hours a day, and you can imagine the difference in curriculum. In Washington they were still working on letters, sounds, rhyming, and not dumping your milk on your friend's head and not wiping boogers on the walls. In Illinois, they've learned 80 (!!!!) sight words and are starting to do addition. In kindergarten. It's discouraging to see how far behind he is, and I'm kicking myself for not researching this before we decided to come to Illinois - but what's done is done. I may hold him back for another year, because the last thing I want to do is throw him into first grade while he's still sounding out words, and the rest of the class is already reading. Unfortunately, he's already taller than most first graders and a few of the second graders (to be honest in a few more years he'll be taller than me, and probably shaving in third grade). At any rate, this may be the best thing for him right now, so he'll just have to start med school (or pool boy school, if he gets his way) a little later.

And me. I've interviewed for a couple positions at different hospitals, and hopefully will hear something back sometime next week. I have classes starting up again in May/June, so that with a full time job and the Vs will hopefully have me so mind-numbingly busy that the months will fly by. Hopefully.

I'm also trying my best to not obsessively read the breaking news from the Army Times, Lewis/McChord's website, msn/cnn/abc/etc etc, or associated press. But it's hard.

So - no best/worst for today; it's still early in the day to call it. But some Avenged Sevenfold for you, because AV is awesome.

So, finally, a year later, I'm getting around to the second part of Why Aleah is Terrified of Rabbits. Part One dealt with a rather horrific experience at the circus with an ax-murderer-who-eats-children-dressed-as-a-bunny, which is bad enough, because as this website (thanks Ashlee) will show, you have to be in a pretty special mental place to want to put on a freaky rabbit costume and scare the shit out of little kids. However, terrifying as that experience was, it wasn't until a few years later that my loathing of rabbits expanded from furries to the actual disease-carrying, chicken nugget-eating, lethal creatures that are lurking in your back yard, twitching all innocent and shit. 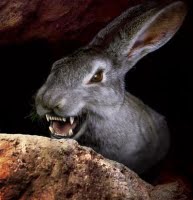 So one day when I was about eleven, I took my step-dad's shotgun and two of my dogs, Spook and Sue (coon dogs I'd helped train myself; YES I admit it) out to the field behind our house to scare up quail. I wasn't a particularly great shot, but it was summer, I was bored, and there was an enormous field with woods behind it for me to get lost in. The three of us, girl and dogs, clambered down the huge ditch behind the house and up the other side and set off across the field.

For a little while I had fun shooting at random squirrels the dogs flushed out. I was still hoping to get a bird on my own, imagining that I'd return home in a couple hours, sweaty and triumphant, with our evening meal effectively shot, cleaned, and strapped onto my back sort of like Annie Oakley, although I had no evidence that Annie Oakley had ever gone hunting quail, let alone cleaned it and wore it home. After a bit longer, I came to realize that I was unlikely to shoot much of anything, so I called the dogs back so we could head home. Sue came quickly enough, but Spook decided to put his nose to the ground one last time, and apparently a few moments later came nose to nose with the most gigantic rabbit in the history of the world; AKA a goddamn were-rabbit: 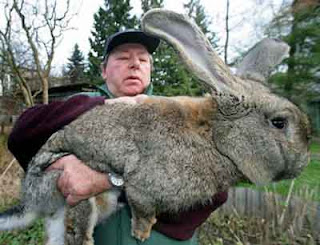 Spook immediately started baying, Sue dashed back to help Spook, and suddenly I found myself dead center in the path of a gigantic frothing (and possibly rabid?) monster rabbit with two hound dogs at its heels and nothing in its way except a rather short for her age girl with a gun nearly half as big as she. As I realized the rabbit wasn't going to do the typical zig-zag rabbit run and instead was going to mow me down, I stumbled backward, accidentally discharging my gun (poster child for gun safety, I KNOW) and clipping the demon in the neck.

Now, on an ordinary, run-of-the-mill, county-fair type of rabbit, this might have been enough to put the animal down. But not this thing. No, instead of quietly lying down and bleeding to death in the field, the injury instead seemed to energize the rodent, and it sprang at me, blood spurting from its neck, teeth bared, and I swear to god that thing was growling at me.

I threw the shotgun at it and took off across the field as fast as I'd ever run and have ever since, head down, arms pistoning, my breath coming in panicky little gasps as I actually ran out of my shoes. All I could hear was the blood pounding in my ears and both dogs baying in full hunting mode, close on the heels of the were rabbit and probably having the time of their lives. Fearing that the rabbit's teeth were inches from the back of my neck, I threw a terrified glance over my shoulder to see how close to death I was.

Unfortunately this was also the same moment that the ditch suddenly reappeared, opening up under my feet like a yawning chasm. My momentum carried me past the lip of the ditch and catapulted me into the ai,r until gravity reasserted itself and I went ass over teakettle into the ditch.

A half second after that approximately forty pounds of bloody, frothing rabbit hit me, immediately followed by another ninety pounds of joyfully howling hound dogs.

So yeah, I peed myself.

At this point, Were Rabbit was on his last legs. He gnashed his teeth a few more times, kicking spasmodically,  before finally expelling his last bubbling breath.

The dogs had a feast.

And I trudged home, covered in blood, fur, and pee.

So there you have it; two events that culminated into a nasty case of leporiphobia that really only comes to head during Easter and Wabbit Season.