"His mom says we can't be friends anymore"

A couple weeks ago, Vlad came home from daycare and told me that his best friend's mother had told her son that he could no longer be friends with mine. They're six, by the way.

At first, I was pretty stumped - I mean, it's not like Vlad skips school, deals drugs, or is a bully. He's an energetic boy, a bit of a class clown, doesn't know a stranger, and is always ready with hugs and compliments ("Chief, those are my favorite sweatpants that you wear! You know, I like how your hair sticks out of your head like that in the morning!")

Then I reflected on some odd conversations we'd been having lately. He came home from school one day and told me dejectedly that someone had told him that since he didn't know who Jesus was, that he was going "down below". I was a little taken aback - who tells a six-year old they're going to hell? When I asked him a little more about the conversation, Vlad told me that his friend had asked him if he knew who Jesus was, and when he said "Oh, no, I don't know him", his friend said that people who knew about Jesus went "up to heaven and lived forever" when they died, but people who didn't, or who did bad things (these "bad things" weren't specified, so I'm sure this could cover any number of things in the imagination of first graders), went "down below" where they never got to see their families again, and "lived forever being punished."

First, a bit of background, in case you don't already know. I am an atheist. My husband is spiritual (meaning he's meditative and reflective when he has big decisions to make, and probably more of an agnostic when it comes to things like whether there's a bigger creative force at work on the universe). We have some really interesting discussions on religions, reincarnation, what happens when we die, energetic forces at work, science, aliens, and pretty much anything thusly related. And one thing we very much agree upon is that when it comes to belief systems, we will allow our boys access to any and all schools of thought, we will only share our personal beliefs with them when asked, and that the boys will be encouraged to think about their own beliefs as they get older. We will not impose our beliefs (or lack of) on them (at least as little as possible; it's pretty much impossible to discuss such things without outlining why you do or don't ascribe to certain systems - however we do think that by being as neutral as we can, this will help foster a mindset of "think for yourself" rather than "this is what you should think".)

But back to the issue at hand. I don't think I can adequately express to someone who hasn't experienced it what it feels like when your child has been hurt - and not physically (because that can be dealt with in its own way). But when your child has been rejected by a grown woman and told by his best friend that they can't be friends anymore, you can't exactly kiss that away.

Here is what I find most interesting though: if your belief system is so frail, so weak, that a six-year old boy who is born an agnostic (as all children must be; you aren't automatically born with religion as an instinctive behavior sewn in) can derail what you're teaching your child, you're doing something wrong. If you're so frightened of outside influences making your child question the things you're telling him, you're doing something wrong. If you need to control things like who your child plays Legos and Super Heroes with in order to indoctrinate them into your way of thinking, you need to send your child to a religious school or keep them home - because I can assure you, my child will not be the only one yours encounters who is, according to your twisted ways of thinking, going "down below".

Vladimir will get over this; he makes friends easily, and fortunately he doesn't seem as bothered by this as I'd initially worried he might. I hope we handled it well; both his father and I have talked with him about it, and reiterated with him that while what happened was not okay, we accept that people believe different things, and we respect that.

Now if you'll excuse me, I need to peruse my Recipes for Heathen Cookin' book; I have Sunday dinner to make. 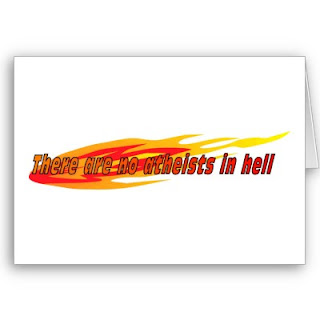